I talk about my Mother in my stand-up routine. The opener is that she's like Hyacinth Bouquet on crack. Which is a pretty good description - if you stayed with her, you'd know what I mean.


I think it's fair to say we didn't have the best of relationships when I lived at home. My mother is a heady mix of mental and old school. Mental: she made my dad get a blind put up in the frosted window in the bathroom incase the neighbor might be spending his days looking out for a glimpse of the shadow of her head. She commissioned a painting by a local artist in Cornwall and had me put in it – in my graduation outfit, holding our dead miniature poodle Candy, whilst flying through the air – 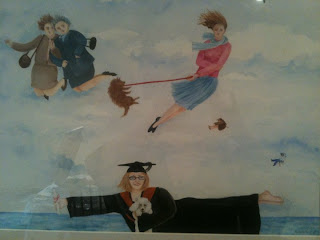 Old School: she doesn't believe in sex before marriage, she thinks the man should walk on the outside of the pavement (I know, I was flummoxed by this one - apparently to protect the woman from splashes or any oncoming traffic that takes a wrong turn...), and that the man should sit on the outside of the table in a restaurant - so that he can order for you, and so that he is in the prime position to pick up the bill. Come to think of it, maybe she's just got issues with men being on the outside!


She also comes from the school of parenting that thinks it's best to talk to you like you are a child, even when you are 32. To be fair, she talks to all her siblings like that as well, so I'm not alone. But it's somewhat frustrating to be faced with a woman who thinks she knows best all the time, when frequently, she doesn't. It's also hard to relax when she keeps telling you to "watch that wine" when you sit on the sofa with a glass of red, concerned that her cream suite might be sullied by a slip of the hand, even though she waves her biro around readily whilst trying and failing the medium hard Sudoku.


We've had our ups and downs, and in latter years, we've found a middle ground of sorts - we even sometimes manage 3/4 days of living together (Xmas etc) when we don't argue. We've come a long way, as Take That would say. But it's still fairly fractious. Primarily because I fight tooth and nail to retain my sense of self, and by that, I mean my adult self, when I go and visit them. And my mother talks to me, endows me, with my childhood, or worse, my teenage self. And after about 4 days (hence my usual stay is no more), I give up the fight and do indeed become the frustrated teenager I once knew. Because it's pretty hard to drop and keep anchor against a tide that strong.


She doesn't really realise. I think she's been like that her entire life, and she's getting on a bit, so I think change is over hopeful. And, those that know her would probably say that her plus points outweigh the negatives. She is one of the most thoughtful and kind people I know. Last year, when I was fed up of flyering in the rain at Edinburgh, day after day, she came out unannounced at 11pm (leaving my father in the hotel room), to help me flyer for my midnight chat show. She's photocopied press clippings of Birmingham previews and was handing them out. I was both touched and mortified that my mum was out amongst the drunken rabble that late at night, trying to flyer for a show that we were selling as "sex on a bed"... I sent her back to the hotel with a tear in my eye. I don't know many mums approaching 70 that would have done that.


My boyfriend and I watched Beginners last night - a rather beautiful and true story of a man who came out to his son aged 75, once his wife had died, and lived until 79, embracing all that life, and the gay world he had never dared to enter, had to offer. And watching the son nurse his dad as cancer took hold, and trying to negotiate the change in their relationship, was profound. I've always joked I'd put my Mother in a home if she got ill. And I think she believes it. But I know deep down, I'd want to look after her, the same way she has looked after me, my dad, her mother, and so many of her friends.


And so, I find myself in a dilemma of sorts. It saddens me that she doesn't really get to see the real me, and I wonder if I ever get to see the real her. She's been a wife and mother so long, I'm curious to know who that young woman was, what desires, disappointments lie beneath all the fuss, the incessant cleaning, and the almost obsessive desire for a cashmere jumper in every colour. And I want her to know me, the adult - the person my friends see, my boyfriend sees, rather than this surly teenager who emerges after any length of time spent together. And I don't know really know how we make that happen.
Posted by TheGoggin at 05:15

Email ThisBlogThis!Share to TwitterShare to FacebookShare to Pinterest
Labels: Daughter, Fractious, Mother, Parenting, the real me